Argentina.... Have you seen how big this place is ?


We entered Argentina from Frey Bentos. The Border crossing was relatively painless and only took about 30 minutes . I did note however that the last stage of the process involved me handing a small piece of paper to a girl who looked about 12 who was hiding behind a curtain in a plastic booth. Pretty impressive security I thought.

The landscape instantly changed and became greener with many miles of wetlands either side of the road. A veritable Twitchers paradise.
We had arranged to meet up with an Israeli family who have been on the road with 4 kids for about 8 months.Their truck was arriving in Buenos Aries that day from the United States. Tuval had identified a camp site  in an area called Tigre , a suburb of Buenos Aries on the Rio Lujan. Sounded fantastic . Upon arrival it was in fact a Gypsy Camp and locals told us that if we went their we would be robbed at gun point . So we ignored all this and went anyway. And yes they were right so we left pretty quick and ended up further down the river in the parking area of a Riverside YPF gas station for boats . It was perfect and we got to know Tuval and Michals wonderful family. 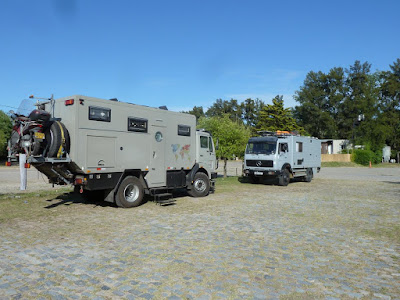 The following day we drove to South to Talpaque and set up camp in a park area by the river. 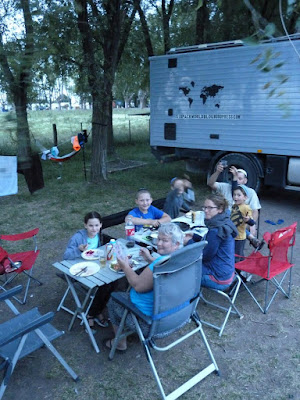 By Chance we met an English woman called Jane who has settled in the area and owned a large Estancia ( Ranch ) about 10 km out of town. ( we will come back to Jane shortly )  It was perfect in the park until about 11pm. At this point the park turned into a party for the locals who had amazingly managed to turn their entire cars into speakers . The party ended about 9 am the next day.

Plan B was hatched and after a few messages to Jane we headed to her place.  The drive to Jane’s place was 10 km of what is normally dry , dusty , gravel road.  However, just be before we hit this track it started to rain quite heavily so we turned up at Jane’s with most of her drive attached to our vehicles. 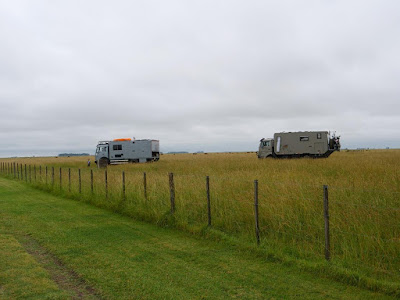 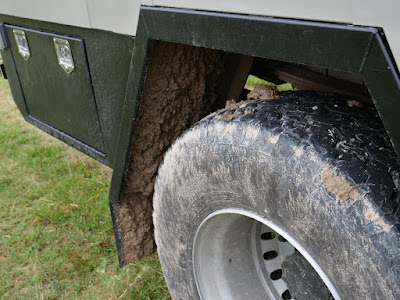 The next day Jane gave us the tour and the hospitality and kindness she threw at us was unbelievable . Tuval and Michal’s kids were treated to a couple of hours of horse riding . I cannot sing Jane’s praises high enough , what a wonderful lady. Look her up if your passing , you will be well received that’s for sure . www.estancialamargarita.com 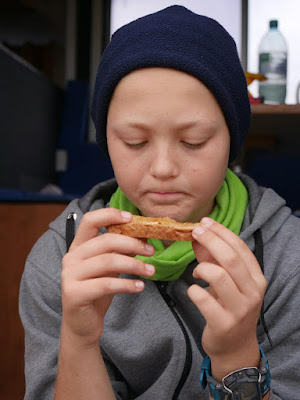 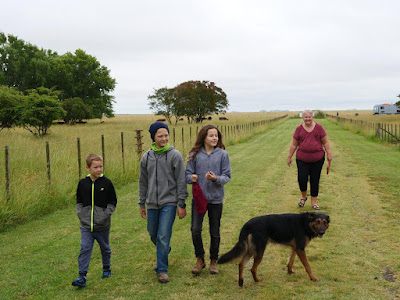 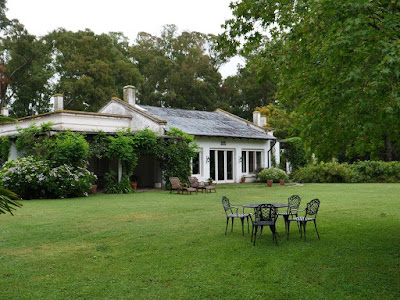 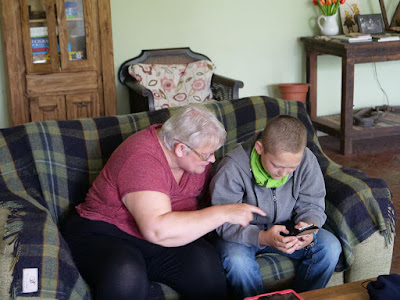 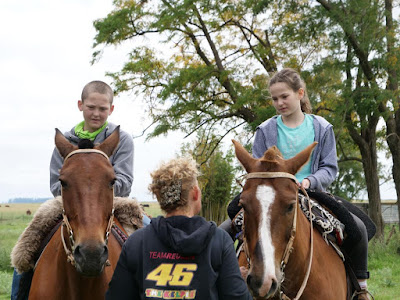 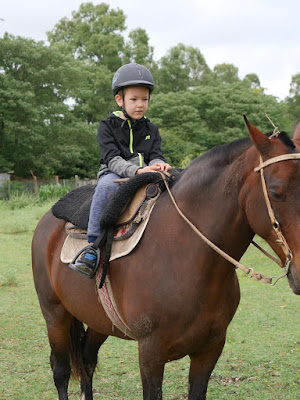 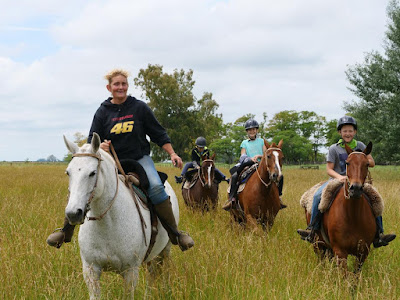 The next couple of nights on our own were very peaceful staying on the shore of a large lake and the yard of an Olive farm.
We had arranged to re meat Tuval and Michal in a large camping area on the shore of Laguna de la Salada . We arrived a day before them. Upon arrival it was beautiful and tranquil with a few locals enjoying the sunset sipping a beer. Not for long. Within an hour of arrival I had created an international incident and operation “ Drag the stupid Brit out of the Mud” was in full swing.  Yes I completely misjudged the firmness of the lakes edge and within seconds had the truck resting firmly on its differentials, tipped over by about 20 degrees. 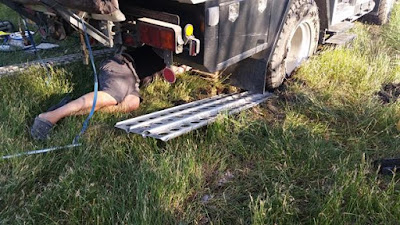 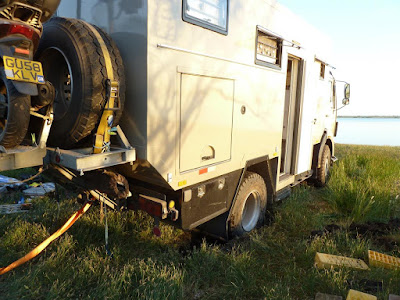 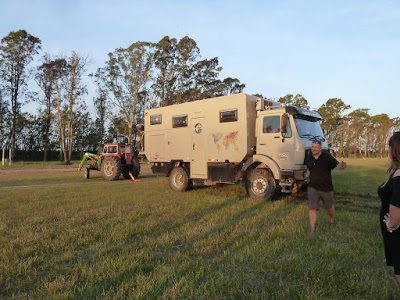 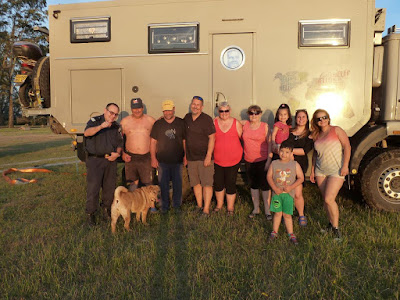 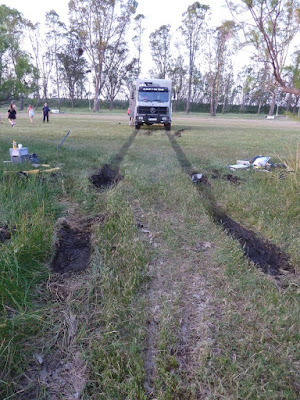 Now this could have been a disaster but actually tuned into one of the best highlights so far. The locals turned up , had a good laugh, and then rallied round to get us out. We had about 20 people there , all of which had a plan. None of the  plans worked and then the local police turned up. This guy had a friend with a tractor who saved the day.  The reason it became a highlight was that we were gob smacked with the unbelievable desire to help us. We offered payment and were nearly pushed back in the lake for thinking about it. The night ended with everyone hugging and kissing each other, exchanging presents and  group photos. We stayed here two more night, a few meters away from the lake though.

The next day our camp became a rally. Firstly we were joined  by a fantastic young Brazilian couple , Nicholas and Elis , who had given everything up, sold all their possessions and bought a roof tent to go on top of their small hatchback and were trotting around South America on a budget that is unbelievable. 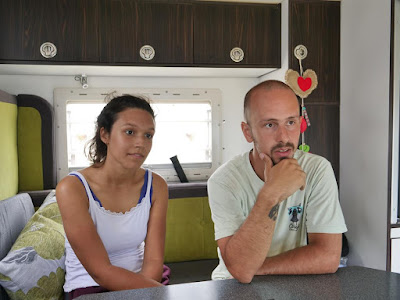 They make videos about their journey and post them on Youtube and apparently if enough people look at it they get a few dollars back to help them travel . So if you would like to support them please look at their site at www.corujacareca.com.br.

Tuval and his crew showed up and then to everyone’s surprise our German friends Ellen and Perry showed up. They had managed to drive in 2 days what had taken us a week.

We all headed further south to a town called El Condor, parking on the promenade. We had come here for two reasons, one was to meet some fellow travellers at a Horizons Unlimited Hubb meeting and the second was to witness the spectacle that is approximately 35000 Burrowing Parrots , that live in a cliff . Both of these events were good. 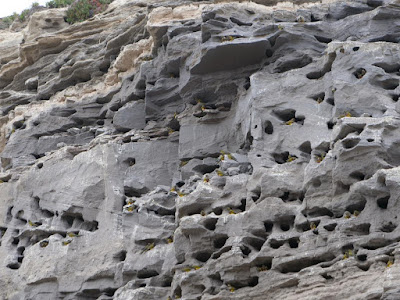 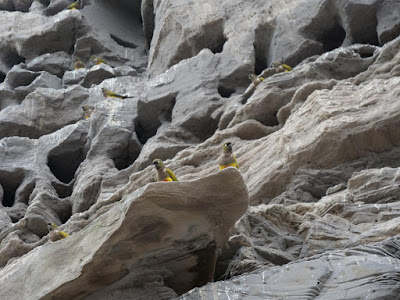 The next day we went to see another  spectacle . Thousands of locals go nude sunbathing on the beach. It was packed and pretty smelly. 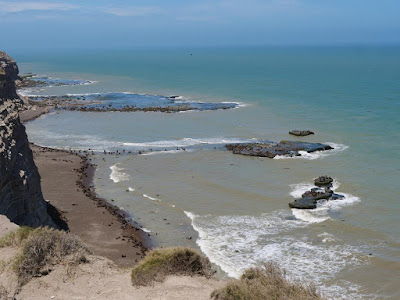 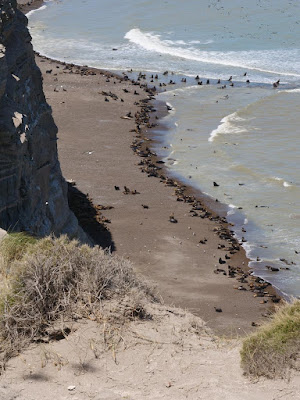 Wild camping places have so far been pretty easy to find and since we have crossed into Patagonia , the whole coast line is a wild camp.

Some of the roads here are pretty interesting. Today we drove the first 150km off road on a gravel and sand track. I manged to make it and no tractors were used along the way..