We re-entered Bolivia , from Argentina , at the border crossing at La Quiaca / Villazon

Unlike some of the borders we have crossed, the exit part of Argentina and the entry part to Bolivia were adjacent to each other.

The Argentinian part went well, however the entry stage had a little drama.

The Bolivian immigration officer opened her window about 2 inches and peered at our vehicle. She then stated that no vehicle this big had previously entered Bolivia before "Ever" and we could not come in. The window was then promptly closed and we could see through the glass that she had now knuckled down to some serious Whatsapp messaging and that her interaction with us was finished.

Luckily for us we were approached by one of the Argentinian Border Customs Officers who, for no reason other than pure kindness, took up our plight and after a few hours it was decided that truck was now looking a bit smaller and our entry was allowed.

The window re opened 2 inches, papers passed in an out several times and we were in.

I must admit that my first impressions of Bolivia at this stage weren't favourable.

We headed off in the direction of Uyuni in the company of two wonderful ladies " Sarah and Clara" who we had met the night before.

Well it wasn't long before  my frustration at the border started to melt and within a few kilometres we realised that Bolivia was quite nice and the scenery was starting to apply the "Wow" factor. 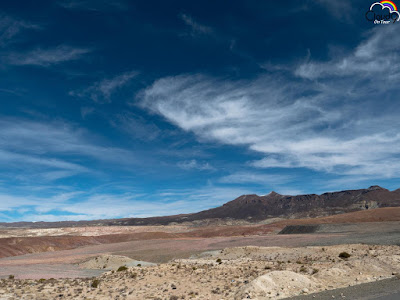 We camped that night with Sarah and Clara on a high Plato and the next day we arrived in the Town of Uyuni.

I am afraid that my first impressions of Uyuni town remained with me throughout our stay there. I Didn't like it , in fact I really didn't like it. I could try to flower it up a bit , but this would be like trying to polish a turd. It wasn't, in my view, a nice town.

We opted to stay out of  town in a cemetery for broken steam trains .

This was an amazing place. We parked for two days right between them all . I must admit it was a bit spooky in the dark when all the tourists had left. 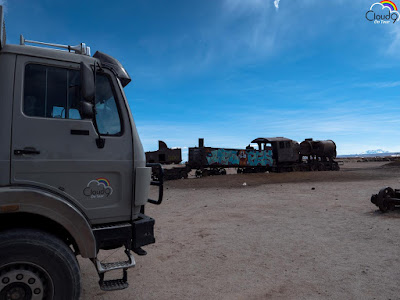 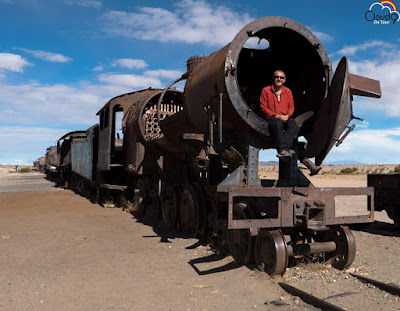 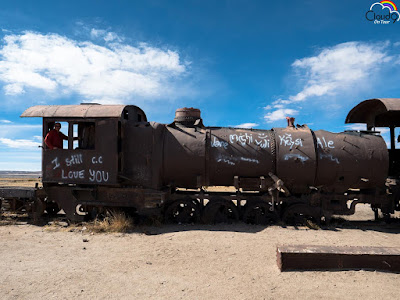 Despite the town being a bit of a disappointment, it didn't matter as nobody comes here for the town.

The Salar is one of the worlds biggest salt flats and covers an area of nearly 11000 square kilometres and is at 3650 meters in altitude. It has recently been host to a section of the Dakar Rally in 2018.

It obviously used to be a sea bed and has somehow, over billions of years, manged to get pushed up to this altitude.

Most overlanders who tour this continent have this phenomenon high on their list and we couldn't believe that we were  actually here.

On the morning of entry onto the Salar we , by sheer chance, bumped into Hartmut and Lisa a German couple that we had last seen near Punta Arenas Chile.

We decided for safety's sake to set off together.

I cannot describe the immenseness of the Salar. It is huge and because there is nothing to focus on or even a visible horizon as such, everything gets out of perspective.

You can see that I was loving it 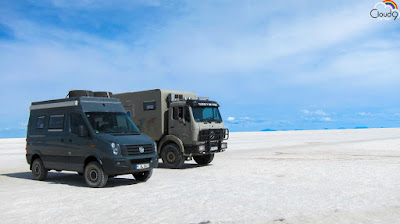 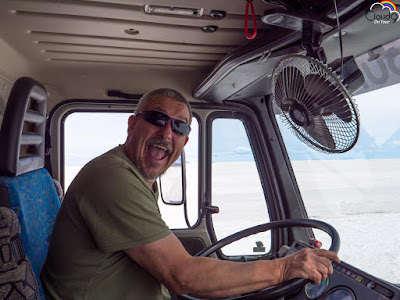 We started of slowly and Hartmut was particularly cautious as he, understandably, didn't want to smother the underside of his vehicle in salt.

Unfortunately first 200 meters onto the Salar found us up to our wheel arches in deep salty puddles. 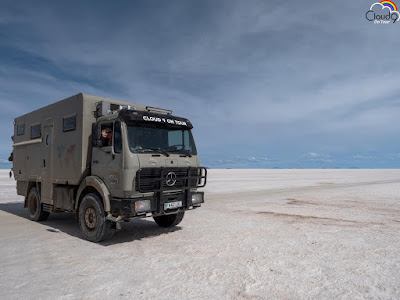 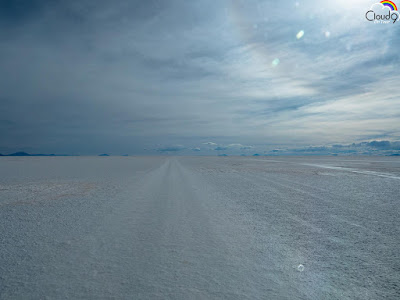 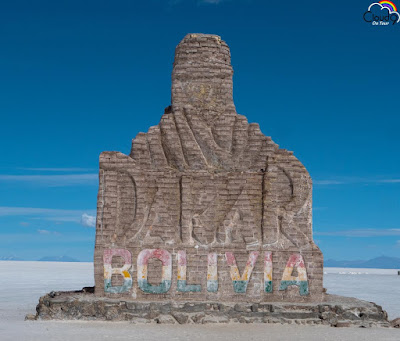 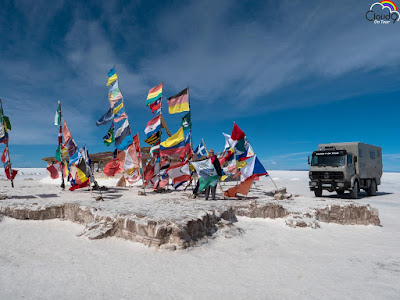 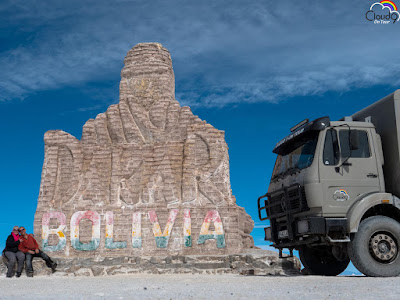 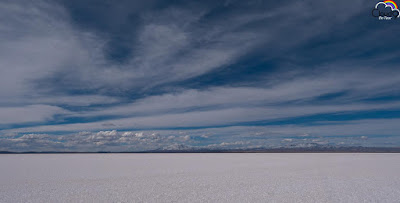 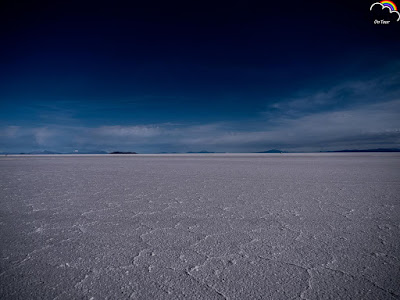 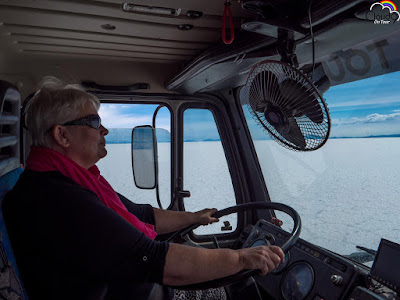 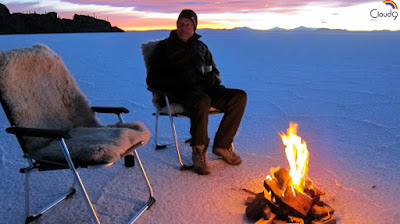 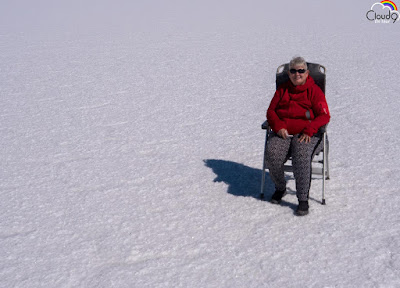 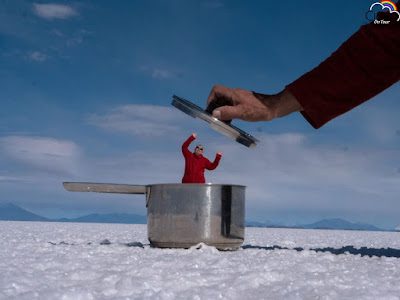 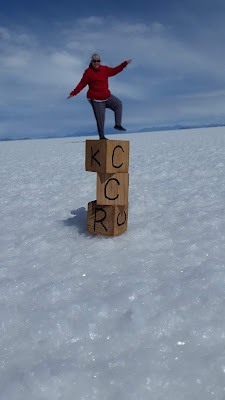 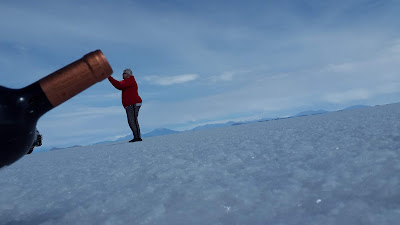 I know, I know.  But hey, why not make the planet a bit warmer. Seriously everthing struggles at this altitude including us.


You should only go on the Salar when its dry, this is why we did it in the wet.  By the time we finished being silly everything we owned was totally contaminated with salt.

When you leave the Salar, if you drive like me, you need to get the vehicle cleaned.

Luckily there are many placed where you can get this done 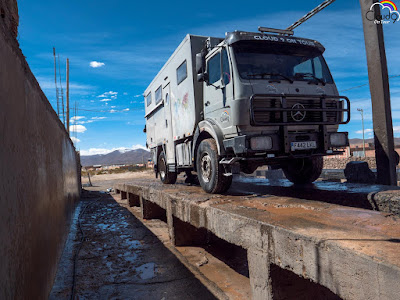 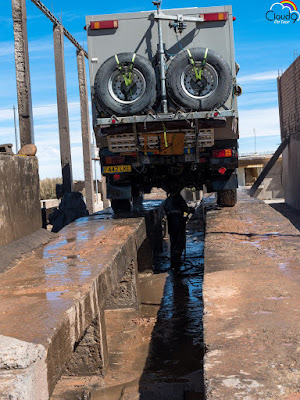